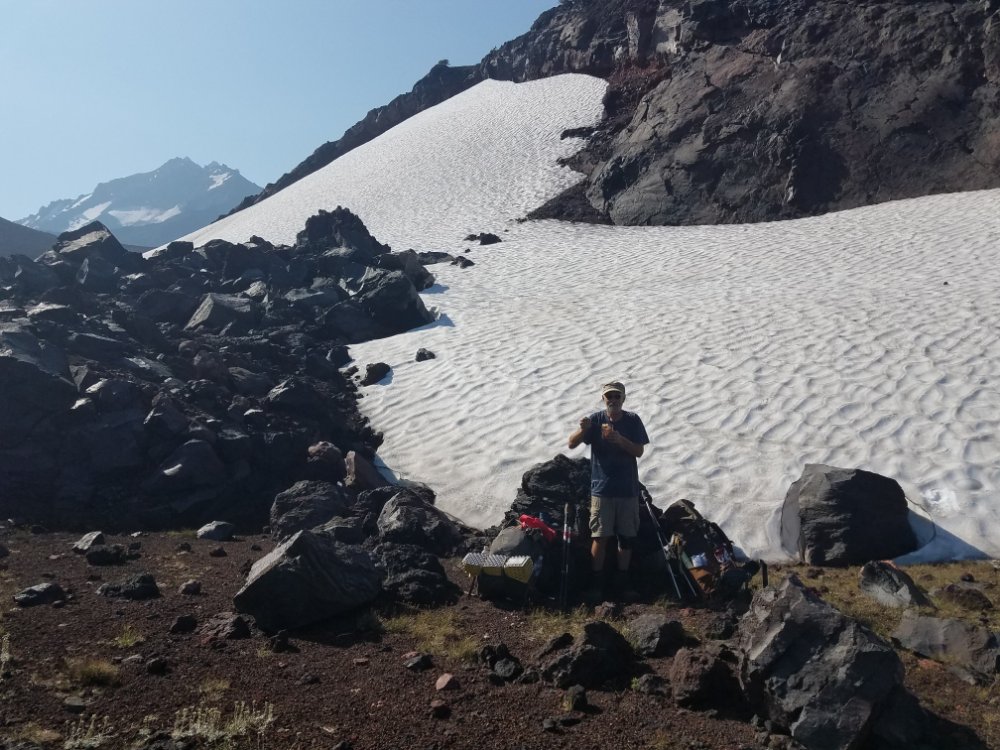 The day started out nice.  I left camp before Totes and after a couple of miles I saw the sign saying I was entering the Obsidian Limited Entry Area.  You are supposed to stay close to the trail in this section.  I had to go to the bathroom so I went off trail and found myself in an area with obsidian chips all over the ground.  They were washing down from somewhere above.  These chips were remains from natives making arrowheads here.  Some of them were clearly arrowheads that broke or were not completed.

I then passed Obsidian Falls and continued up until I reached the spring where the creek began.  I had breakfast there and Totes caught up to me there.

The trail then climbed up the volcano through lava flows.  The trail was well built and a good footpath even though it was through rough terrain.

We passed a large patch of snow and stopped to make orange snow cones.  We dug down to clean snow, filled our cups and then squirted orange mio drink mix over the snow.  It was delicious.

Later in the day, after crossing Hwy 242, the trail got nasty.   For 6 miles or so we hiked in a massive lava flow.  Unlike in the morning the trail here was not built to create a nice tread.  We walked on a jumble of loose lava rocks that just beat up our feet.  It was slow, tedious and painful.  Through this section Mt Washinton looked to me like it was giving me the finger so I renamed it Finger Mtn.

When we finally got out of the lava we entered a burned area.  The trees were all dead but still standing. A ranger we ran into had told us to expect more thunderstorms so we could not camp near dead trees.

After 5 miles we passed out of the burned area and were about to camp when we noticed smoke rising from the trees about a half mile above us on Mt Washington.  We kept going and were thinking about how to contact the Forest Service when a helicopter flew by and circled the area that was smoking.  They know.

We are camped in dense pines less than 8 miles from Hwy 20 where I will hitch to Sisters.  We are only 2 miles from the trail to the Big Lake Youth Camp where Totes has a supply box.  We expect that Bones is also there.

I will go to Big Lake since they give free meals, showers and laundry to hikers.  I don’t need to be in Sisters until Monday to be ready to meet Gayle on Tuesday morning.  I have a day to kill.

I am a little sad to say goodbye to Totes and Bones but I am so excited Gayle will be here soon.  After Gayle’s visit I may try to catch up to these hiking partners I have enjoyed so much.