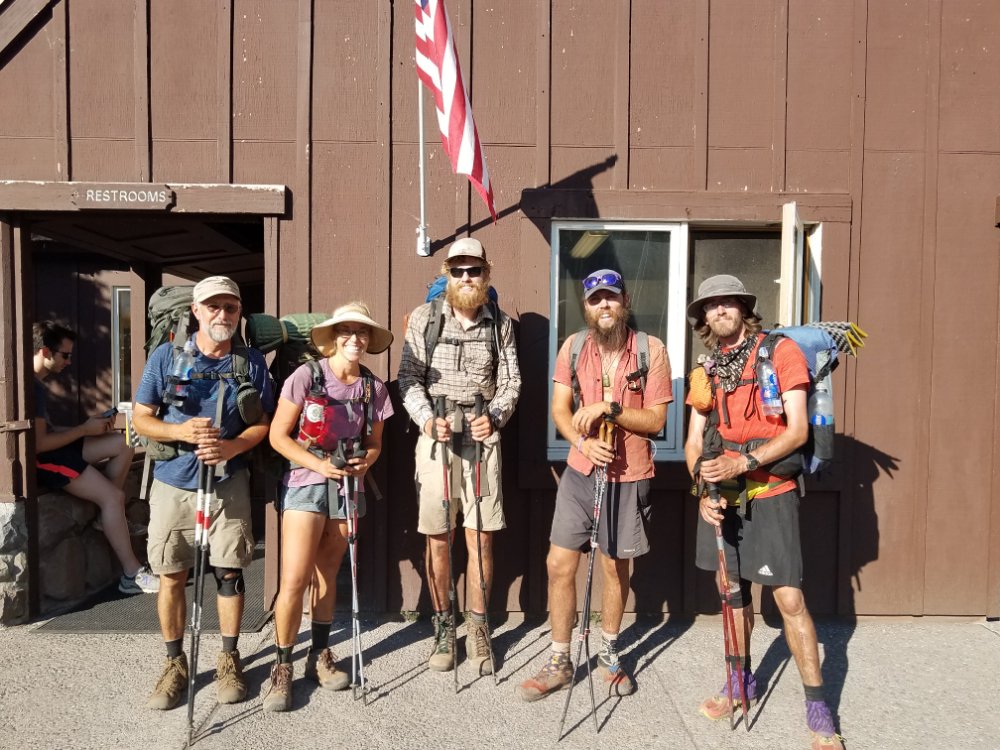 Pictured above, left to right:  me, Totes, Viking, Cola, Bones.

Last night from my campsite on the ridge near Devils Peak I noticed an odd cloud to the north.  Just before dark 10 to 12 planes and choppers flew overhead and towards the cloud.  Of course it was smoke.

This morning the smell of smoke was strong.  To the west the sky was brown and to the east the valley was filled with misty smoke.

I started hiking north and in 1.5 miles hit a short traverse on snow.  I was halfway across it when a woman called out.  I saw her in the rocks below.  She was heading south on the trail but was going a long way around on rocks to avoid the snow.  We had a shouting conversation.

She was northbound but had turned around because of what she said was heavy smoke ahead.  She had camped the night before at the spot where I was going for water and breakfast.

I had to get water so I continued on.  When I got there I made breakfast and used my satellite device to email my wife Gayle and my sister Joy.  I asked them to look online for fire info.  Both of them sent me info about the fire that has closed the trail right in the park.

I dawdled and Totes showed up.  Shortly after that Bones arrived and then Viking.  I knew Totes and Bones but Viking was new to us.  Viking had connectivity earlier and got some news about a new fire just west of the trail.  He had read that they might close the trail between us and Crater Lake.  We all consulted maps and identified one trail we could take that would lead east, away from the fire.  We agreed we would all stick together, go north to that trail and then decide what to do.

So we hiked…fast.  We also had to load up on water as there was a 19 mile stretch without any.  I carried 4.5 liters from the last stream.  It was all I could do to keep up. Just before the potential bail out spot we ran into some southbound hikers.  They had not had thick smoke or heard if any closure.  We decided to go on but quickly.

All day I struggled to keep up with these folks.  Viking with his darn long legs led the way.  I was usually last, but I also am 25 years older than all of these folks.   Along the way Cola joined us.  When we got to within 8 miles the wind picked up and was coming from the west and worried us.  We went faster.  I really pushed myself.

We made it to Mazama Village campground hours sooner than if I was by myself.  We all ate together and are now in the hiker section of this large campground.  I am dead tired.